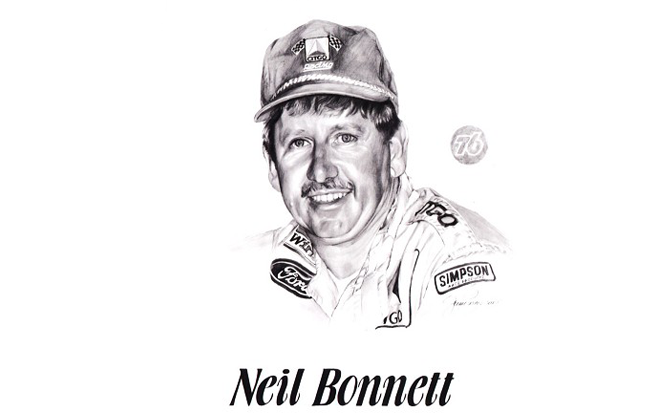 Neil Bonnett excelled in everything he did. In addition to being a NASCAR Winston Cup Star, he was an accomplished television broadcaster, as well as a top notch hunter and fisherman. Winner of 18 Winston Cup races during his career. Bonnett started racing on the short tracks near his hometown of Hueytown, Alabama. He won everything in sight, including 80% of his starts in 1972.

Bonnett broke into Winston Cup racing in 1974, with his first win coming three years later During his career, he won several high-profile races, including the 1980 Talladega 500 and the Southern 500 in 1981. He also won at Charlotte and Daytona, and drove for such legendary car owners as the Wood Brothers, Junior Johnson, and Richard Childress.

An accident at Darlington in 1990 postponed Bonnett’s racing career, and forced him into a lengthy period of rehabilitation. During this time, he became one of the best color commentators in sports, and hosted a weekly TV show called ‘Winners’ on TNN.

Bonnett received clearance from the doctors to begin testing race cars. and on July 25, 1993, Bonnett resumed his Winston Cup career at his “home” track of Talladega. On February 11, 1994, Bonnett was killed in a single car crash during a practice session at Daytona International Speedway.