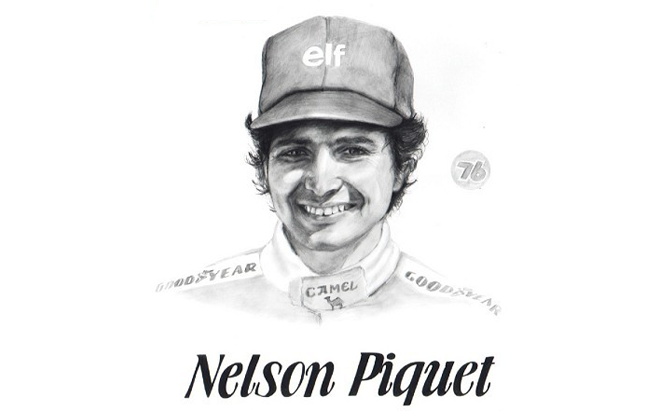 Piquet, from Rio de Janeiro, bypassed a potentially successful lawn tennis career to take up kart racing in 1970, winning the Brazilian championship two years later. By 1976, he was the Brazilian Super Vee champion, and the next year he headed for Europe and Formula Three racing.

It was during the 1978 season that Piquet got his first Formula One ride, driving an Ensign in the German Grand Prix. He also had drives for McLaren and Brabham that same season. He would spend seven years with Brabham, and record his first F1 victory in 1980 at the Long Beach Grand Prix.

1981 was a “breakthrough” season for Piquet, as he won three races and gained his first world championship in a thrilling duel with fellow South American Carlos Reutemann, which Piquet won by a single point. Piquet seemed to thrive on close point battles, and two years later he beat Alain Prost by two points to claim his second world championship, both for Brabham.

Leaving Brabham after the 1985 season, he joined the Williams team for the 1986 season and won four times, but lost the world championship to Prost. Piquet came back strong in 1987, and won his third title, this time over teammate Nigel Mansell. A rift between himself and Mansell, however, caused Piquet to look elsewhere for a ride the following year.

In 1988 and ’89, Piquet raced for Lotus, but went winless during those two seasons, and moved over to Benetton at the start of the 1990 season. He won the Japanese and Australian Grands Prix that year, and closed his splendid career in 1991 with a win in the Canadian Grand Prix.