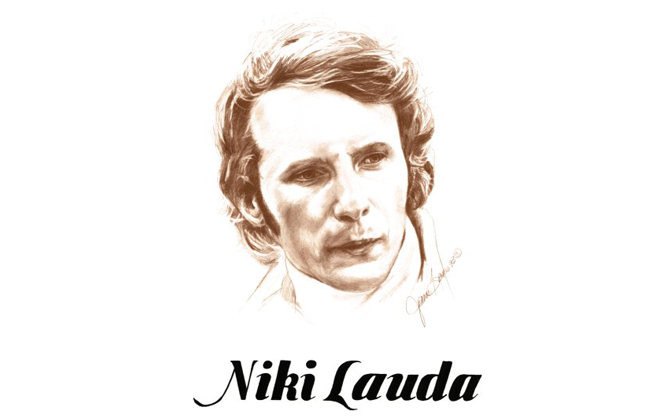 Nicholas van Lauda, known as Niki to his family and friends, was born on February 22, 1949 in Vienna, Austria. His family was wealthy, making their money and mark in the paper-manufacturing industry.

Although they did not approve of his interest in racing, Lauda began driving at an early age, first driving forklifts around family factories and then delivery trucks throughout rural Austria. In 1966, he first saw the German Grand Prix and quickly started looking for a racecar of his own.

Lauda found his first race car in a “race-ready” Mini, which he acquired from a local hero, Fritz Baumgarten. Lauda offered to trade Max his street Mini for the racing version and pay the difference when he sold the car. Baumgarten had placed his own decals and markings on the car, which Lauda explained to his family that he was merely storing the car for him.

In 1968, he came in second with that Mini, only behind Baumgarten. This second-place finish made the local newspapers. Upon discovering his racing debut, his relationship with his parents became strained.

From there, Lauda won four climbs in a row and left the mini for a Porsche 911S. In 1969, he began racing for Formula Vee. In his first race with Formula Vee at Hockenheim, he led most of the race until he spun out on the last lap.

After Formula Vee, Lauda moved on to Formula Three. He bought his way on to the March Engineering Formula Two team in 1971 by taking out a loan against his own life insurance policy.

In 1971, while still a Formula Two driver, Lauda participated in his first F1 race at the Austrian Grand Prix. In 1972 he competed in 12 F1 races, coming in 11th place at the Argentine Grand Prix and 7th in South Africa.

In 1973 Lauda joined the F1 British Motors Racing Team and then the prestigious Scuderia Ferrari Team in 1974. It was on that team where he earned his first F1 victory in Spain. Lauda finished that season in fourth place.

1975 was Lauda’s breakout year in a Ferrari 312/T. He won five races in Monaco, Belgium, Sweden, France and the U.S. and went on to become the World Champion. These victories were the first won by the Italian car in nearly a decade.

The 1976 racing season is one of the most famous in F1 racing history. Out of nine races, Lauda won five, and had nearly twice as many points in the standings as his closest competitor.

Leading up to the 10th race of the season, Lauda attempted to get the other drivers to agree to boycott racing at the German Grand Prix in Nürburgring, citing safety concerns surrounding driving through the Eifel Mountains. He was outvoted, something others would soon come to regret.

During the second lap, Lauda lost control of his car and drove into an embankment, and the car subsequently burst into flames. He was pulled from the burning vehicle, having suffered multiple injuries including inhalation of toxic gases.

Lauda sustained first, second and third degree burns all over his body, with the most extensive damage occurring to his wrists and head. He had several broken bones and substantial damage to his lungs from breathing in fumes. It was feared Lauda would not recover from these injuries and he was administered last rites by a priest.

Defying all odds, Lauda recovered from the horrific crash and was racing again only six weeks later. With bloody bandages on his head, he finished fourth in the Italian Grand Prix. Britain’s James Hunt won two races in Lauda’s absence and the two entered into a chase for the 1976 championship.

In the end, heavy rains on the day of the Japanese Grand Prix caused Lauda to withdraw. Hunt finished this race in third place, edging Lauda out for the championship by one point.

Lauda won another championship in 1977- winning three races that year and coming in second six times. He did not race in the final two races in 1977, as he had already clinched the championship title. The reason for the protest? A strained relationship with Ferrari over his decision not to race in the 1976 Japanese Grand Prix.

He joined the Brabham team for the 1978 season but became frustrated with the quality of cars he was given.

Niki van Lauda retired from racing in September 1979 to focus on Lauda Air, an airline company he had founded earlier in the year. He didn’t stay away from racing for long, joining the McLaren team in 1982 with the most lucrative racing contract to-date.

He finished the 1982 season fifth and the 1983 season tenth, and won his third championship by a narrow, half-point margin in 1984.

Lauda retired again, this time, for good, in 1985 after finishing tenth for the season. In retirement, Lauda served in various executive roles for several racing teams, was a television analyst and founded another airline, NIKI, which he eventually sold along with his shares in his other airline.

Niki van Lauda was inducted into the International Motorsports Hall of Fame in 1993, and in 2013, his life hit the big screen in Ron Howard’s movie, Rush. The plot of the movie centers around Lauda and James Hunt’s rivalry in 1976.

Although he seemed indestructible, Lauda’s health deteriorated and he required several transplants of his kidneys and a lung in 2018- resulting from injuries sustained in his crash.

On May 20, 1979, Niki van Lauda passed away peacefully in a hospital in Vienna, Austria. He was 70 years old. His funeral in his hometown was attended by many drivers and dignitaries of the sport.