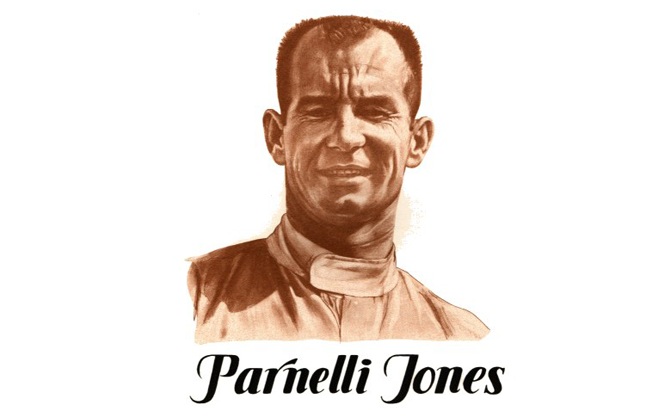 The competitive versatility of Rufus Parnell Jones is, perhaps, unmatched in all of racing.

It is fair to say that such a record is indicative of a man truly one with motorsports.

Jones was born on August 12, 1933, in Texarkana, Ark. At a young age, he moved to Torrance, Calif, where he grew up. Having a name like Rufus Parnell undoubtedly caused problems that could only be settled with swinging fists, but young Jones got some help from an aunt, who called him “Parnelli.” He like the sound of it, dropped the “e” and was on his way.

He learned racing by doing it. He was rolling cars in fields near home, like he had seen stunt drivers do, by the time he was 17. He moved on to Dirt and Sprint cars and won the Midwest Sprint Car crown by 1960. It was then that he caught the eye of J.C. Agajanian, who brought him into the big-time California racing circuits.

He was a Stock Car phenomenon. He won at Pike’s Peak in 1963 and the USAC Stock Car crown in 1964, the year he won seven races outright and shared one with Joe Leonard.

He first got into the Indianapolis 500 in 1961 in a car called “01′ Calhoun,” now on display in the Speedway Museum. He finished 12th that year and he was named Rookie of the Year. In 1962, he finished fifth after becoming the first driver to surpass 150 miles per hour in qualifying. In 1963, he again started from the pole and was 23 seconds ahead with less than 100 miles to go when his oil tank developed a horizontal crack, spraying oil onto the track.

Jones slowed and second-place Jim Clark made up great distance. Cohn Chapman, Clark’s car owner, pleaded the case to Chief Steward Harlan Fengler to have Jones black-flagged. Agajanian pleaded the defense. Finally, the oil spray stopped when the oil level dropped below the crack and Jones went on to win the Indianapolis 500.

In 1967, Andy Granatelli offered Jones a ride in a revolutionary turbine-powered car. It ran on kerosene and was so quiet it came equipped with a horn. Purists, needless to say, didn’t like it. They weren’t mollified by the fact that it qualified sixth, three miles per hour slower than the No.1 qualifier.

But in the race, it was a terror. Jones had piled up a 13-second advantage over Dan Gurney when the race was halted by rain on lap 18. It resumed the next day and Jones led 171 laps. He had a 52-second pad over A.J. Foyt on the 197th lap when the bearings froze in his gearbox and he was done for the day. After that, rule changes made the turbine car obsolete.

He became a car owner and produced Indianapolis winners in 1970 and 1971 with Al Unser driving. He continued to compete in Off-Road and Trans-Am races, but he concentrated first on being a businessman, having found success in Firestone distributorships, among other things.