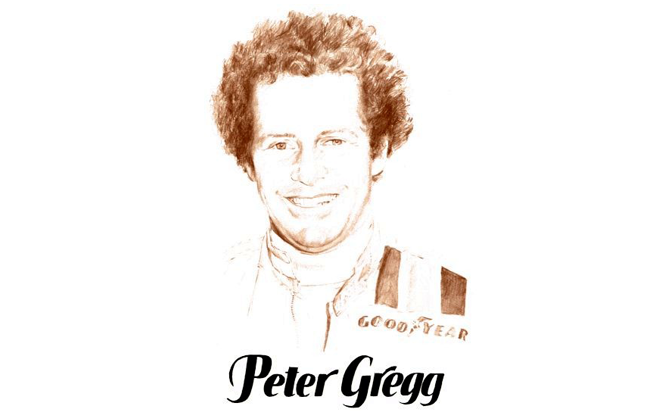 Peter Holden Gregg was born on May 4,1940, in New York City. He was the son of a mechanical engineer who was involved in the manufacture of marine incinerators. He had many advantages in life and used them to educate himself and become financially comfortable.

At the same time, he had a passion for auto racing and he pursued that with a zeal that continued long after he had become financially successful with bank directorships and the other establishment trimmings.

He graduated from Deerfield Academy in 1957 and moved on to Harvard University, where he acquired a degree in English. He then moved into a career in film making, coupling that with a stint as a serious squash player and then as an automobile racer.

He began with gymkhanas and ice races after an initial appearance in a hill climb in 1958 in Laconia, NH. After his graduation from Harvard, he moved to Europe and attended the Centro-Sud Driving School. He than enlisted in the U.S. Navy and became an Air Intelligence Officer, winding up in Jacksonville, FL.

In 1962, he pursued his motorsports career with the SCCA. In April of 1963, in Osceola in a completely stock production Corvette, he won. By the time he was discharged from the Navy in 1965, racing and Jacksonville were in his blood.

He took over a local Porsche agency and by 1968, it had prospered enough for him to acquire a Mercedes Benz dealership. By 1970, he had a third dealership, this one called SportAuto, which offered Fiats and MGs.

He became a serious Porsche racer in 1964 with a 904 and then moved into competition with a Carrera. He was the SCCA’s Southeastern Division champion in 1967 in two classes and had scored victories in Daytona and Sebring.

In 1968, he entered competition in the SCCA’s Under-2-Litre section of the Trans-Am Series. He won six Trans-Ams and the title in 1969 and also took the SCCA’s B Sedan National Championship.

In 1971, he was part of the major Trans-Am Series, driving Bud Moore Ford Mustangs. He won the Trans-Am Championship in 1973 and again in 1974. By this time, he was involved with IMSA and scored his greatest achievements with the IMSA GTO overall championship in 1971 and 1973. It was also in 1973 that he had his greatest moment as a road racer when he won the 24 Hours of Daytona in a Porsche Carrera co-driven by Hurley Haywood. He then impetuously announced his retirement, preferring to lead a life as a director of the Jacksonville National Bank, a club tennis star and a speedboat racer out of the exclusive Ponte Verde Yacht Club.

At the time of his death in 1980, Gregg had achieved a reputation as one of America’s greatest and most successful road racers.