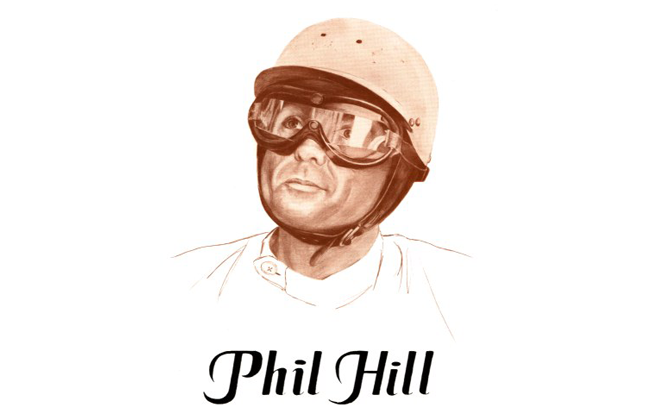 It is therefore obvious why he has been called one of the greatest drivers of all time.

He was born in Miami, Fla., but was raised in Santa Monica, California. He majored in business administration at the University of Southern California but quit to work on Offenhauser-powered midgets, even racing them on occasion. His love of cars began early, when he was given a Model T Ford by his aunt.

Hill went to Great Britain in 1949 to study maintenance at the Jaguar factory as part of his job with a new dealership. When he got back, he brought with him an XK12O and raced it in Santa Ana, California, where he finished second. He won the initial road race of the United States at Pebble Beach, in 1950. He continued to win in his own cars and those owned by others.

Hill kept driving – in enduros, the Mexican Road Race and countless other events – and by 1955, he had “retired” twice. But in that year, he won at the Nassau Speed Week and that led to a factory ride in sports car racing the following year.

For two years, Hill continued to win races. With Oliver Gendebien, he won at LeMans. He waited for an offer to drive in Formula One from Enzo Ferrari. On September 7, 1958, he got it and drove in his first Formula One race in the Italian Grand Prix. He finished seventh in the standings that year and sixth in 1959. He was third in 1960.

The fateful year was 1961. Again driving for Ferrari, Hill joined forces with fellow driver Wolfgang von Trips. They staged a terrific battle for the World Championship – which got Ferrari a bit antsy. Hill won at Belgium that year while Trips won the Dutch Grand Prix. The competition ended tragically at Monza, where Trips died in a crash. Hill, though shaken, went on to win the race and the World Championship by a single point, 34-33.

By 1962, Hill had come close to a second World Championship. He won LeMans once again and also took the Nurburgring 1000. Nevertheless, he was released by Ferrari.

Hill’s last season in Formula One was in 1964, but it wasn’t very productive. Instead, he enjoyed a victory in the Daytona Continental that year. In 1967, he won the Nurburgring 1000 in Jim Hall’s Chapparal and won again in the BOAC 500.

After that, he retired. This time for good. He was all of 39 years old.