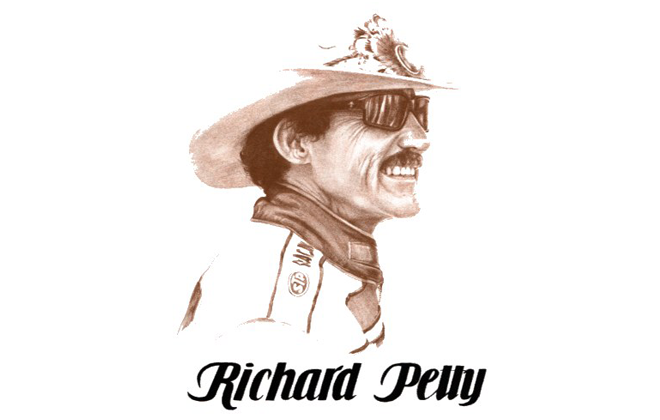 Known to many as “The King” in the world of racing, Richard Lee Petty is the most decorated driver in the history of NASCAR, with 200 career victories and seven Monster Energy NASCAR Cup Series Championships under his belt.

Born on July 2, 1937, in Level Cross, North Carolina, Richard Petty grew up in the racing world. His father, Lee Petty, is a three-time NASCAR Grand National Champion (now called the Winston Cup), the winner of the first Daytona 500 in 1959, and is a founding member of the Petty Enterprises Racing Team. His brother, Maurice, built engines and was a crew member while his mother, Elizabeth, kept score. It was inevitable that Richard would join the family business of racing.

Petty started racing in 1958, and the following year he accumulated nine top-10 finishes and was named Rookie of the Year. Two years after his first NASCAR race, Petty earned his first first-place finish in Charlotte, North Carolina. He won his first Daytona 500 in 1964, a race he went on to win a total of seven times.

Off the race track, Petty married Lynda Owens on July 22, 1959. They have four children- Kyle, Sharon, Lisa, and Rebecca. Kyle went on to race in NASCAR just like his father and grandfather before him.

He briefly left NASCAR in 1965, after rules were introduced that made his beloved #43 Plymouth’s engine illegal. As a result, he spent a year on the drag racing circuit, but he returned to NASCAR in 1966. That year, Petty had the best single season by any racer ever, speeding his way to 27 first-place finishes and his second Grand National Cup.

Petty was seemingly unstoppable in the 1970s, claiming the Winston Cup title in 1971, 1972, 1974, 1975, and 1979. He was also voted driver of the year in 1971. The Daytona 500 win in 1979 might be Petty’s most memorable win. Not only did he snap a 45-race drought during the first race to be televised from flag to flag, but the 1979 race would also become infamous for a fistfight breaking out between second and third place drivers Donnie Allison and Cale Yarborough, who crashed on the last lap. This race is widely recognized as the catalyst for NASCAR’s wide popularity today.

Richard Petty’s last win would come in 1984 at Daytona, and in true fashion, this race was one for the record books. On lap 158, a crash brought out the yellow caution flag, turning that lap into the final lap of the race. He and Cale Yarborough battled it out once again with Petty finishing only a fender length ahead. President Ronald Reagan was in attendance at this race marking the first time a sitting president attended a NASCAR race. He celebrated with Petty in Victory Lane.

Richard Petty and the Petty Racing Team have made a tremendous impact on the world of racing with contributions to improve the sport like nylon window screens, roll bars, cooled helmets, and two-way radios.

Petty officially retired from racing in 1992 with more than 1,800 races under his belt. However, he has stayed busy since. He is currently a spokesman for Liberty Mutual Insurance, Cheerios, and Goody’s Headache Powder to name a few. In 2006, he and his wife Lynda starred alongside each other in Disney and Pixar’s Cars, Richard is appropriately the voice of “The King” and Lynda appears as “Lynda Weathers.”