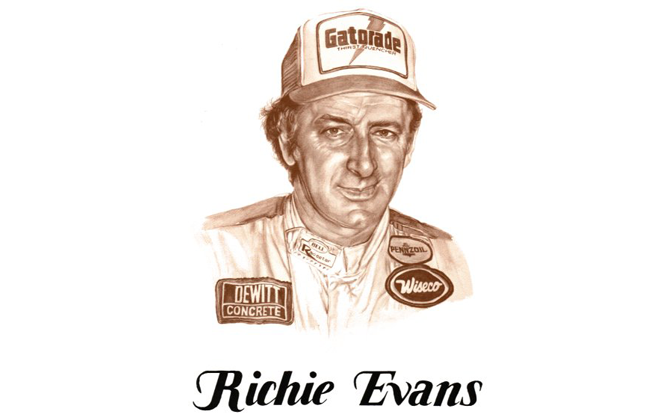 Richie Evans, a product of Rome, NY, raced Modifieds on oval tracks, and worked on them off the track too. In fact, after Evans won his first NASCAR national Modified championship in 1973, the NASCAR Record Book ventured that he ‘seems to get as much excitement out of making a race car perform as he does driving one.

Evans’ did indeed love the mechanical aspects of racing. putting in about 100 hours a week in order to keep two cars running during the 1973 season.

Evans’, in fact, left the family’s farm when he was 16 and became a mechanic at a gas station. A race driver suggested he build a hobby car to race at the new Utica-Rome Speedway. He did, and the rest is history.

Evans’ was 32 when he won his first NASCAR national Modified crown in 1973. It was his first season of serious point chasing and he thought it was fun as well as a lot of hard work.

It became a way of life far Evans, and winning eight consecutive U.S. championships remains one of the supreme accomplishments in motorsports.

Certainly Rome, NY, was something special in Modified racing. It also was the home of Jerry Cook, who won six NASCAR national Modified titles, and the Evans-Cook duels became legendary.

Richie Evans, who won more than 400 feature races during his career, was 44 years old when he was fatally injured in 1985 during a practice crash at Martinsville Speedway.