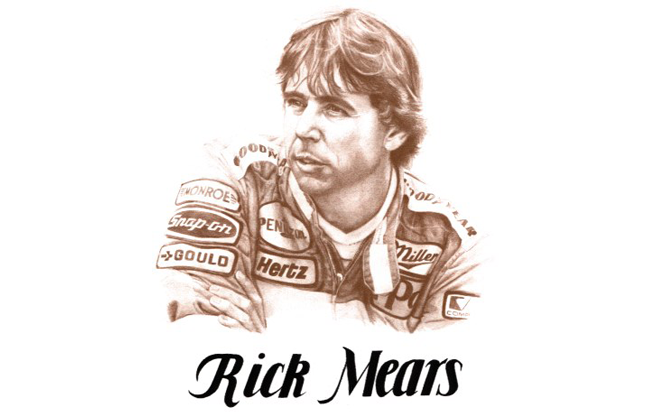 Rick Mears was born on December 3, 1951, in Wichita, Kansas. Noted for his domination in IndyCar competition, Rick began his racing career in 1968 on motorcycles in the deserts of Southern California. Mears began his four-wheel racing career in off-road racing, and in 1973 he took seven off-road victories while racing sportsman stock cars at speedways. In the late 1970’s, he switched to Champcar racing, making his debut for the small Art Sugai team, driving an Eagle-Offenhauser.

In the fall of 1977, Rick met car owner Roger Penske. Penske offered Mears an Indy car ride as a substitute for Mario Andretti in races that conflicted with Andretti’s Formula One schedule. In 1978, Mears started on the front row in his first Indianapolis 500, was named Indy 500 co-rookie of the year, and scored his first of three Indy car victories. This was but a forerunner to his spectacular career. In 1979, Mears won his first Indianapolis 500 from the pole, in just his second start at the Speedway, and went on to win his first Indy Car World Series Championship. Mears won his second and third Indy Car World Series titles back-to-back in ’81 and 82, becoming the first driver to capture three PPG Cup Championships. Nineteen eighty-one also marked the only time an Indy car driver won every road course event in one season when Means set race records with each victory at Watkins Glen, Mexico City, and Riverside.

Rick Mears’ philosophy of “taking it easy when it doesn’t matter but running hotter than anybody else when it does count” is one that stood him quite well in his entire career. Danny Sullivan once said, “Rick is the best guy I’ve ever seen on an oval. I don’t know where he gets that extra speed. He’s the yardstick for all of us.”