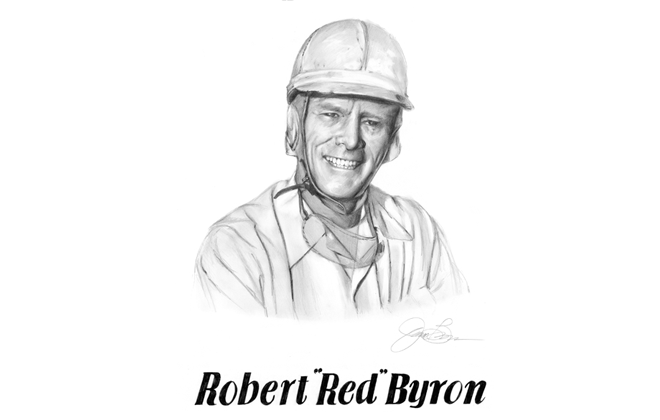 Robert “Red” Byron from Anniston, Alabama, got his start in the early 1930s in unorganized races in Talladega. When World War II broke out, Byron served as a tail-gunner on a b-24 pulling off 57 missions before his plane was shot down over the Aleutian Islands. Byron spent over two years in military hospitals while doctors tried to rebuild his left leg. He was told he would never walk again, but in February 1946 Byron returned to racing. He placed his injured left leg in a steel stirrup which was bolted to the clutch. He won the next two races. Byron won the first NASCAR sanctioned race on a beach-road course on February 15, 1948. He went on to win eleven races that year and finished in the top three 23 times to claim the very first NASCAR Championship. Byron ran in 6 races in 1949 winning two and earning 842.5 points to become the first driver to win a NASCAR points championship. Byron retired from racing in the early 1950s. He was inducted into the National Motorsports Hall of Fame in 1966. In 1998 he was named one of the Top 50 NASCAR Drivers.