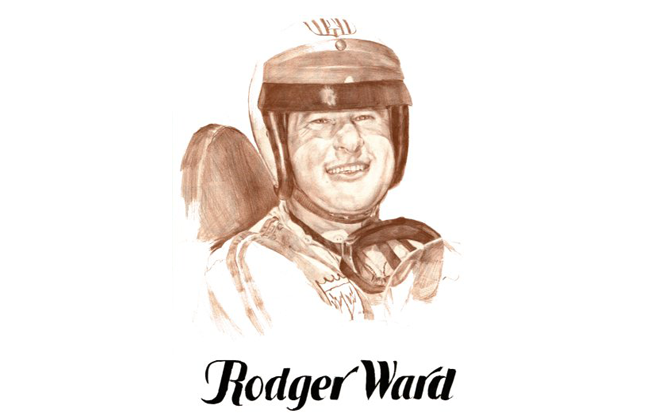 Rodger Ward was 14 years old when he built a Ford hot rod with skills he had learned while tinkering with parts in his father’s auto wrecking and junk yard business in Los Angeles, CA. The family had moved there after Ward was born January 10,1921, in Beloit, KS.

That hot rod was an indication the young Ward intended to pursue a racing career, one way or the other. He dropped out of high school his junior year and was learning something books couldn’t show him, how to be wary of police while racing on the streets at 3 a.m.

His story might have taken a turn for the worse had not World War II started. He became a P-38 fighter pilot, and he enjoyed flying so much he thought of making it his career. He began to fly a B-17 and was so good he was retained as an instructor in instrument flying. But when the war ended, so did the glamour of flying.

He was stationed in Wichita Falls, TX, when a quarter mile dirt track was built and his dream of racing was renewed. He saw a few Midget races and talked his way into a job maintaining Ford engined Midgets. When the program was short one driver one night, he volunteered. He didn’t win, but he was competitive enough to think about trying the sport after he was discharged and returned home to California.

Ward began racing Midgets in 1946 and spent most of the year at the rear of the pack. In 1947, he began to wangle the occasional top-five finish and then in 1948, he won the San Diego Grand Prix. His reckless style gained him a loyal following. The following year he raced an Offenhauser and won often enough to keep the ride

In 1950, the popularity of Midget racing had peaked, but Ward added the one feat of which he always remained proud. In a feature at Gilmore Stadium, Ward, in a Ford powered car, whipped all the Offys. It was like a milk horse beating Man-O-War, but he did it. He felt ready for Indianapolis.

He won the AAA Stock Car title in 1951 and passed his Indy rookie test that year. He lasted 34 laps in the race before a broken oil line put him out. In 1952, he lasted 130 laps when the oil pressure failed. In 1953, he was out with a faulty ring and pinion after 177 laps. In 1954 he stalled his car on the backstretch and there was some debate if it was his fault for not coming in for gas.

His luck at Indy was indeed sour, despite success elsewhere. But it was in 1955 that things reached a nadir. While driving the Aristo Blue Special, the front axle snapped while he was trying to avoid being lapped by Bill Vukovich. The car launched itself into the air, hit with a jolt then bounced up again. Vukovich hit the car hard and died as a result of the tragic accident.

Ward suffered a cut on his nose, but emotionally, his injuries were far worse. He struggled with anger and despair and thought of quitting, because he and Vukovich were close friends. He went on to Milwaukee for the next race but refused to drive the car after a kingpin failed and a wheel flopped off in practice. He was fired on the spot.

In 1956, Ward began to turn a slumping career around. He finished eighth at Indianapolis and made the 500 Club for drivers who lasted the race. Then in 1957, he finished 27th at Indianapolis after a supercharger blew, but on the Championship Trail, he led 10 races, finished four and of those four he won three. Again mechanical failure put him out of the Indy 500 in 1958, but he finished fifth in the national point standings with wins at Trenton and Milwaukee.

In 1958, Ward became part of the Triple W team with mechanic A.J. Watson and team owner Bob Wilke. Finally, there came success at Indy. By virtue of fast pit work, Ward held the lead easily and went on to score his first victory at the Brickyard. He also won the USAC National Championship with victories at Milwaukee, DeQuom and the Indy Fairgrounds.

In 1960, Ward battled Jim Rathmann in the Indy 500. Ward took the lead on lap 183, then Rathmann grabbed it on lap 190. It was Ward, then Rathmann. Finally, Rathmann surged ahead on the 197th lap and went on to win after Ward had to back off because of tire wear.

It was Ward’s turn in 1962. He was in total command from lap 126 and seemed unbeatable, rolling to his second career Indianapolis 500 victory. He also won the USAC championship again that year and at that point he was the circuit’s all time point leader.

At age 44, Ward entered his last Indianapolis 500 in 1966. He finished 15th and found he didn’t like rear engined cars. He also found, on a hot day in Trenton, NJ, that he no longer had the stamina.

But what he did have was a stellar racing career that rose skyward from misfortune, becoming a great representative for the sport he loved. Today, Ward is a successful businessman living in Southern California.