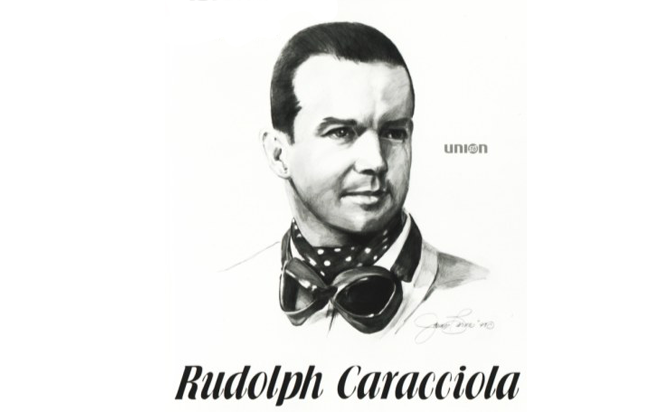 Rudolph “Rudi” Caracciola was considered one of the greatest of Grand Prix drivers, winning more than 225 races during his career of 30 years, and claiming three European Driving Championships, the equivalent of today’s Formula 1 World Drivers Championship.

A native of Remagen, Germany, Caracciola discovered a love for automobiles at an early age, and became an apprentice at the Farnir auto works in Dresden. After World War I, he became a salesman for Farnir, and began racing their cars to promote sales. He fell in love with speed, and tried to gain the attention of the factory-backed teams at Mercedes-Benz and elsewhere. He won his first race in 1923 in a 4-cylinder car at Berlin Stadium.

Caracciola began driving for Mercedes in some of their less significant races, but in 1926 he got his big break. With the factory team in Spain for an important race, there was no one to enter the initial German Grand Prix. He talked Mercedes into loaning him a car, and went on to win in a driving rain. He joined the factory team soon after After winning several races over the next four years, Caracciola was out of a job when the Depression forced Mercedes to suspend their racing operation. He bought his own car with the last of his savings, and won the Irish Grand Prix.

In 1931, he became the first foreigner to win Italy’s 1,000-mile Mille Miglia. The next year, he won ten races for Alfa Romeo, while his teammate Tazio Nuvolari won six. In 1933, he shattered his thigh bone in a crash at the first event of the year at Monaco, and missed the entire year

In 1935, back with Mercedes, he won his first European tide, beating a young Auto Union driver named Bernd Rosemeyer. In the next two years, Caracciola and Rosemeyer swapped European championships, with Rudi prevailing again in 1937. His friendship ended tragically when the two were chasing world speed records in 1938 on the Autobahn, and Rosemeyer’s car crashed and exploded. Caracciola went on to win his third championship, but something was gone from his driving.

In 1939, Caracciola again won the German GP but he fled to Switzerland and retired when Hitler tried to “honor” him with a Nazi title. He did not race again until 1946, when he entered the Indy 500, but was severely injured in a crash while trying to qualify. After that he raced on a limited basis, and also did high-speed testing for Mercedes. He raced for the last time in a sports car race at Berne, when his career was ended by another crash. He died of cancer in Kassell, Germany, in 1959.