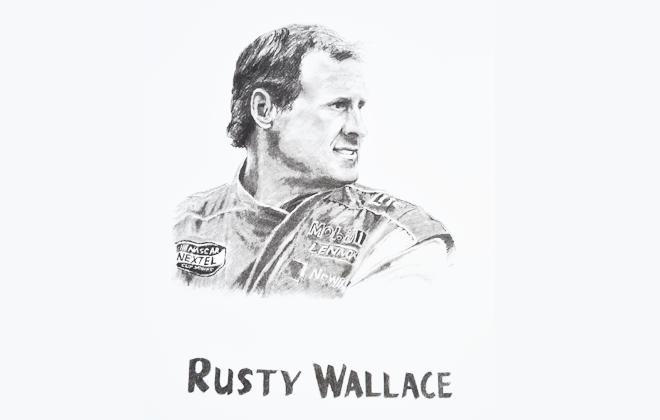 Rusty Wallace always gave race-fans something to talk about. The 1989 NASCAR Cup Champion and 55-time winner in NASCAR’s top series turned heads and ruffled feathers with his aggressive driving style and outspoken charisma. He treated every race like it was on a quarter-mile short-track.

He started racing in 1973, inspired after watching his father become a championship racer in Missouri. Rusty’s first race was at Lakehill Speedway and he would claim the Central Racing Rookie of the Year award later that year, but that was only the beginning.

Rusty won over 200 races across the Midwest and earned a pair of local track championships in the 1970’s. In 1979, Wallace was named USAC Rookie of the Year.

After picking up an American Speed Association championship in 1983, Rusty made his full time move to the Winston Cup Series and he picked up his first career win at Bristol Motor Speedway in 1986.

Wallace continued to get better with each season, and in 1989, he came out on top in a fierce championship battle with Dale Earnhardt by just 12 points, winning the NASCAR Cup Championship.

In 1991, Wallace joined Penske Racing. Some of Rusty’s best years came in that iconic No. 2 car, as he won a total of 37 races over the remainder of his career, his last coming at Martinsville in 2004 at the age of 47.

Rusty’s success wasn’t limited to NASCAR. He not only won the 1991 International Race of Champions Series (IROC) Championship, but also became the only driver in IROC competition to win three of the series’ four events in a single season in 1991.

At the time of his retirement, Wallace ranked as one of the top-five money winners in NASCAR history, with nearly $50 million in career earnings. As of 2013, his 55 Cup victories rank ninth best.