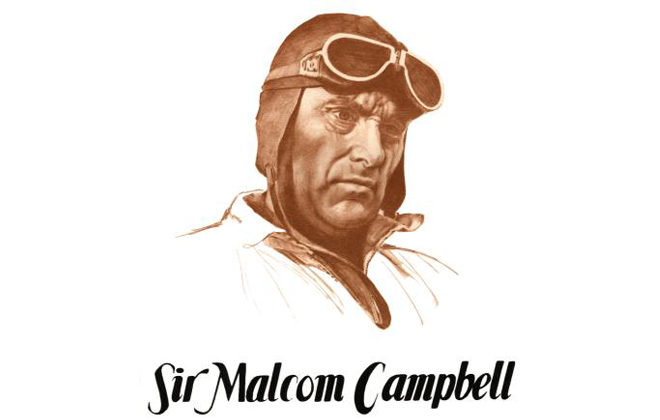 Of all the Men of Speed, none was more celebrated than Sir Malcolm Campbell.

There are many who established land speed records, but none so often or as prodigiously as he. By 1935, on the Bonneville Salt Flats in Utah, he became the first man to eclipse 300 miles per hour in a “Bluebird” car powered with a Rolls-Royce airplane engine.

Campbell was born in Chiselhurst, Kent, England, the only son of a Scottish diamond merchant. While in Europe studying the diamond business, he became a bicycling and motorcycle enthusiast. For three years straight, he won a London-to-Edinburgh motorcycle reliability test.

By 1910, he had his first car, which he promptly named “Bluebird.” By 1924, a “Bluebird” powered by a 12-cylinder Sunbeam engine took Campbell to his first official international land speed record of 146.16 miles per hour at Pendine Sands on the barren coast of Wales. A year later, he upped the speed to more than 150 mph.

He wasn’t the only man in quest of records, however. Among his challengers was England’s Henry Segrave. Segrave went faster than 156 mph in 1926 and the record continued to escalate from there, broken by other daring men.

Campbell was in South America preparing for another record run in 1929 when Segrave set the record of 231.44 mph at Daytona. Unable to beat that in South America, Campbell returned to Daytona in 1931 with a “Bluebird” and an aircraft engine. He hit 246.09 mph to establish the record. He was knighted that same year.

Before his death in 1948, Campbell saw many men beat his land speed record. But none was more honored or widely recognized as he. In his time, he became the very symbol of man’s quest for excellence.