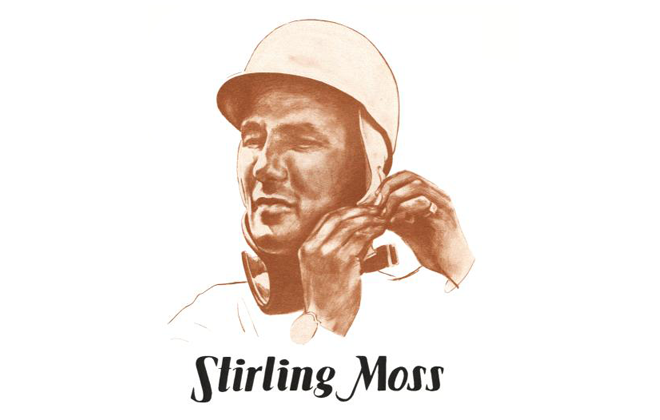 Perhaps it is fair to say Stirling Moss was the most celebrated driver of his day to have never won a World Driving Championship.

That he didn’t does not diminish his career one iota. Moss won 16 of 66 Grand Prix starts and in all major events, his record is listed as 194 wins in 466 starts. For four consecutive years, 1955-58, Moss finished second in the World Driving Championship and was third in successive years, 1959-61. He won the Mille Miglia in 1955.

He was born on Sept.17, 1929 in London. His dentist father had been a race driver, competing at Indianapolis in 1924 and 1925. He took to cars early, but didn’t decide to go racing until 1946, much to the disapproval of his parents.

Moss felt if he put his mind to it, he could be successful. He eventually moved into a Cooper Formula 3 which he first entered in the Bugatti Owner’s Club Hill Climb in 1948. He finished fourth overall and first in his class. He won his second Hill Climb the next time out and by the time the year was complete, he had won three speed trials and three more Hill Climbs.

From there, Moss moved into Sports Car racing and became one of the greatest, winning every important race with the exception of LeMans. He drove an astonishing number of different cars throughout the ’50s, including the Mercedes Benz he co-drove with Dennis Jenkinson in the Mille Miglia.

From the start of the World Driving Championship, created in 1950, Moss was always considered a favorite to capture it. But it was to be Juan Manuel Fangio who held sway. Some have said Moss might have fared better if he had not chosen to run British cars whenever possible. “Better to lose honorably in a British car than win in a foreign one,” he would say.

He won his share, though. He won the British, New Zealand, Monaco, Moroccan and Italian Grands Prix, among others. It was at Monaco in 1961 that he had perhaps his greatest race. He drove an underpowered Lotus-Climax which was the decided underdog to the powerful Ferraris.

Moss gained the upper hand on lap 14 with Ferrari driver Richie Ginther having fallen back. By lap 81, Ginther had made up much of the distance and was just four seconds behind Moss. It seemed inevitable he would overtake his rival.

But it never happened. Underpowered as he was, Moss was able to match the speed of the Ferraris and win by 3.6 seconds.

Moss was seriously injured in a crash in the Glover Trophy race in Goodwood in 1962. He emerged from the accident with his left side partially paralyzed and, after coming out of a coma, he was slow to react.

But he would accept nothing but a full recovery. In a few brief months, he had recovered to the point where he felt he could drive again. On May 1,1963, he stepped into a race car, again at Goodwood in a private session. He ran around the circuit for a half an hour and when he returned, he said simply, “I am retiring.”

He realized he had to think about everything he used to do automatically, and that would never do. He simply wouldn’t be competitive and the intense Moss would not race unless he could be at his best.