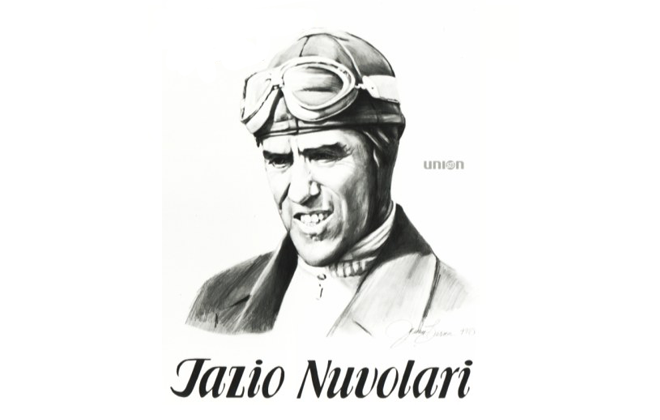 Tazio Nuvolari, born in the Italian province of Mantua in 1892, didn’t win an auto race until he was 32, but made up for lost time quickly. He won 70 races (52 of them outright, regardless of class), and among them were 12 World Championship races and 49 Grands Prix.

Nuvolari’s career began on motorcycles, winning many of the 300 he entered, including at least once when he was strapped to his machine while in a body-length cast, the result of previous crashes. The 5-5, 130-pound Nuvolari, known as Mantovano Volante, or the Flying Mantuan, honed his driving skills during WW I by driving an ambulance in the Italian Army.

His first auto race was in 1921 when he drove an Ansaldo to second in class and fourth overall in the Circuit of Garda. Nuvolari raced automobiles sparingly during the early to mid-I 920’s, with his first win coming in 1924 at Tigulho, driving a Bianchi. That same year he won the Italian motorcycle championship. After three more years of racing motorcycles exclusively, he returned to auto racing in March of 1927, when he raced a Bugatti in the Mille Miglia. He won twice that year, at Garda and Rome.

From that point on, Nuvolari dominated European auto racing for the next decade. He won the strenuous 1,000 mile Millie Miglia three times, and captured Le Mans in 1933. Among his many wins in 1935 was the German Grand Prix, which may have been his biggest career victory. The 200,000 Germans on hand expected one of their own to win, in either a Mercedes-Benz or an Auto Union, but Nuvolari took the lead on the last lap and won in an Alfa Romeo.

Nuvolari won in all kinds of cars (Bugattis, Alfas, MG’S, Maseratis, Auto Unions and Ferraris), on all sorts of courses, including hill climbs. He also won the Yugoslavian Grand Prix on September 3,1939, the day Europe plunged into World War II. It was the last international race in Europe for seven years, and when racing resumed in 1946, Nuvolari was 54 years old.

He did race four more years, winning occasionally, including his last one at Monte Pellegrino on April 20, 1950.

During his career, Nuvolari had most major bones in his body broken at least once in racing accidents, lost an index finger, and wound up with one leg an inch and a half shorter than the other, He died in 1953 from lung hemorrhaging, also the result of the racing grind.