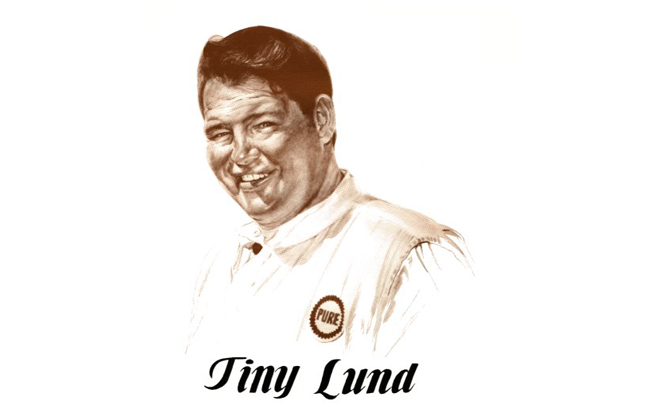 DeWayne Louis Lund was born in Harlan, Iowa in 1929. Tiny started racing motorcycles at age 15, then tried Sprints and Midgets, but gave them up because of his size. Lund stayed with Modifieds, earning a good reputation in Iowa even as a youngster. In 1955, after serving in the US Air Force, he returned to racing. On February 14, 1963, Marvin Panch was driving a Maserati experimental car in practice at Daytona International Speedway when the car became airborne, slid on it’s top and caught fire. Tiny was the first man to reach Panch and pulled him from the fire. Because of his burns, Panch was not able to compete in the Daytona 500. Panch suggested to the Wood Brothers that they let Tiny drive their Ford in the Daytona 500. Tiny won the biggest Winston Cup race of his career, the Daytona 500, and was subsequently awarded the Carnegie Medal for Heroism. During his career, Tiny won over 500 major features and 49 major racing events. He was a four-time champion in the Grand American division, winning titles in 1965, 70, 71 and 74, Lund died August 10, 1975 after a racing accident.