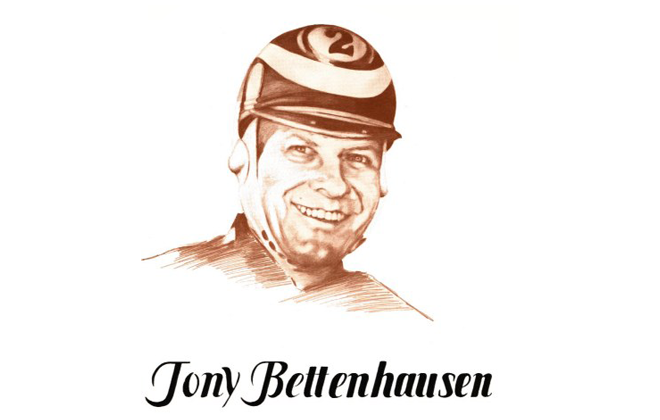 The man they called “The Tinley Park Express” was recognized as one of the kindest in the sport of auto racing. It has been said there had never been a friendlier, more helpful man.

Bettenhausen won the USAC championship for the first time at age 35 and then won again at 42, when he became the only man to claim the title without winning a race.

Bettenhausen was born in Tinley Park, Ill. As a boy, he was handy with his fists. He had to be, since any kid named Melvin was in for trouble. He was so good he was nicknamed “Tunney” after the heavyweight champion Gene Tunney. “Tunney” became “Tony” and the name stuck.

He became an avid fan of Midget racing after watching the best go at it in the Chicago Armory. He decided to give it a try, but quickly found out it was harder than it looked – he got the nickname “Flip.” Nevertheless, he boldly walked into race car owner Murrell Bellanger’s office in 1938 and announced he would be willing to drive Bellanger’s Championship Car. Bellanger brushed him off but Bettenhausen responded by saying Bellanger would plead with him to drive one day.

World War II interrupted Bettenhausen’s racing activities, but he returned to success on the Championship circuit. In 1946, he won his first major race in Goshen, N.Y. The next year, Bellanger offered him a ride and he scored another victory at Goshen and one at Springfield. In 1949, he won at DuQuom and Detroit. In 1950, he won at Milwaukee, Springfield and Bay Meadows, Calif. But the big year for Bettenhausen and Bellanger was in 1951, with eight victories and a pair of seconds in 14 races on the AAA tour. He was the champion.

After that, Bettenhausen announced his retirement from all but Indianapolis competition. He hadn’t fared well at Indy, which rankled him. He failed to finish again in 1952 and fared no better in 1953 and ’54.

That year, he was hack. He had a full season of Championship racing planned but it was cut short by an accident in a Midget race in Chicago. He flipped into a concrete wall and suffered head injuries. He was in critical condition for days, but was back planning for 1955 by season’s end.

In 1958, Bettenhausen used a string of high finishes to win the national championship. Even though he didn’t win a nice, a dramatic runner-up finish at Phoenix assured him the title. A year later, he finished second to Rodger Ward.

But he never won at Indianapolis. In 1961, he died in a crash while testing a car for long-time friend and competitor Paul Russo. He would not have another chance at Indy.

It hardly matters. His championships and victories stand as testament to his skill.