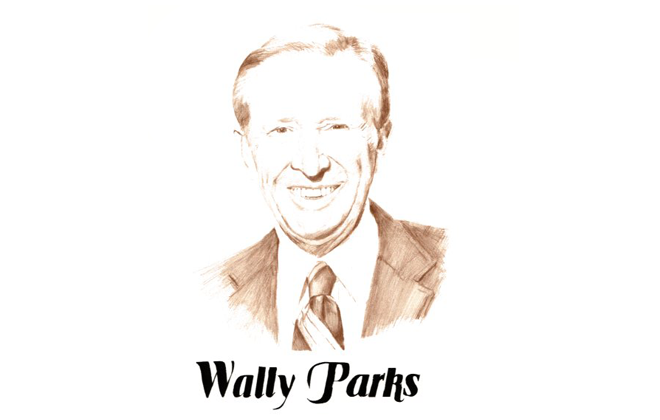 Wally Parks was born in Goltry, OK, but spent most of his youth in California. It was there that he became interested in hot rodding when he went to watch the pioneers of the sport compete on the Muroc Dry Lakes in the desert area of Southern California.

In 1937, he joined the Roadrunners, which eventually joined with other Southern California groups to form the Southern California Timing Association, predecessor of the NHRA. Parks had bought and modified a Chevrolet while working in the auto industry in a General Motors assembly plant, where he eventually became a test driver.

When World War II came, the plant was converted to the production of tanks and Parks tested them. He became part of an exhibition tank drill team until the Army grabbed him up and eventually sent him to the South Pacific. While in the Philippines, Sgt. Parks decided he needed a V-8 jeep and built it with an engine commandeered from an old passenger car. The result was the world’s first Jeep rod, open exhaust and all. It changed his career. He became a troubleshooter for the Army, travelling all over the Philippines in his hot Jeep.

When the war ended, Parks returned to GM for a short time until he resigned to become the business manager of the SCTA. He put together the first hot rod show for the rodders to exhibit their machines. It was a rousing success and the idea of a national organization was already brewing in Park’s imagination.

“Hot Rod” was anathema then, referring to the kids who raced illegally on public roads. Parks and his colleagues were determined to change the meaning of the word.

It was a long and successful battle. Parks became the editor of Hot Rod magazine which he encouraged Bob Petersen, a publicity assistant at a movie studio, to start. Parks then supervised the standardization of the sport to a quarter mile acceleration run from a standing start, between cars classified in the same class of handicapped according to the rating of their class against that of their opponents.

By 1963, the NHRA was organized in every state of the Union and had spread overseas. The organization became a member of ACCUS, the Auto Competition Committee for the United States, American representatives to FIA, and Parks became its representative. By this time he had retired from active rodding, which he had pursued while editing Hot Rod magazine.

Parks resided over the phenomenal growth of rodding throughout the western world and spawned numerous imitators. He was not the sole motivating force; many others in sections of the country also nurtured the sport. But he was the best organizer and the best politician.

Today, the NHRA has 85,000 members worldwide and sanctions over 4,000 events annually. Wally Parks will always be remembered as the founder of professional drag racing and the NHRA.