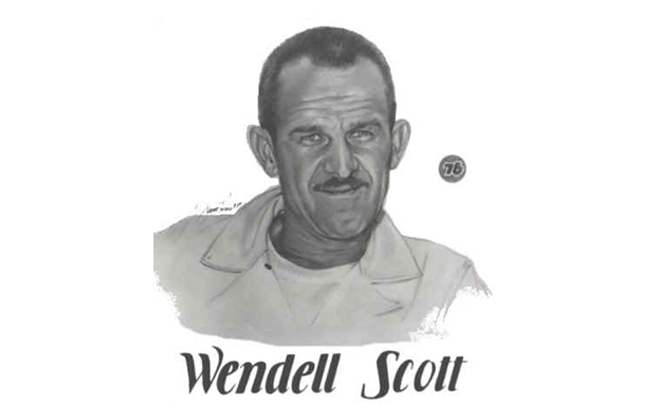 Wendell Scott, the only black driver in NASCAR for virtually all of his career, probably earned more respect than he did money. His career was a constant struggle with low budgets.

The Danville, VA native started racing in 1947. In his first race, he finished third in a borrowed car, won $50 and was hooked. In the next few years he won 128 hobby, amateur and modified races, on the old Dixie Circuit and outlaw tracks. In 1959, Scott enjoyed his best season ever. He won 22 races and captured the Richmond track championship as well as the Virginia State Sportsman title.

Low budget operations such as Scott’s often need a helping hand, and both Earl Brooks and Ned Jarrett have been credited by Scott as being a big help to him during his career. He and Brooks often traveled together. On the family side, Scott often used his sons as members of his pit crew.

Scott bought a year-old Chevrolet from Buck Baker in 1961 and moved up to NASCAR’s Grand National (now Winston Cup) division. In 1963, driving a car he bought from Ned Jarrett, Scott finished 15 in the points.

NASCAR ran a split season then, and the third race of the 1964 season was on December 1, 1963 at Speedway Park in Jacksonville, a one-mile dirt track. Scott beat Buck Baker to become the first black to win on NASCAR’s highest level, a distinction he still holds.

In May of 1964, Scott was down on his luck and almost out of racing when Ned Jarrett set up a deal for Scott. He was able to obtain a Holman-Moody Ford that had been raced the year before in USAC for a dollar. Driving that car, Scott finished 12 in points despite missing several races. Over the next five years, Scott consistently finished in the Top Ten in the point standings.